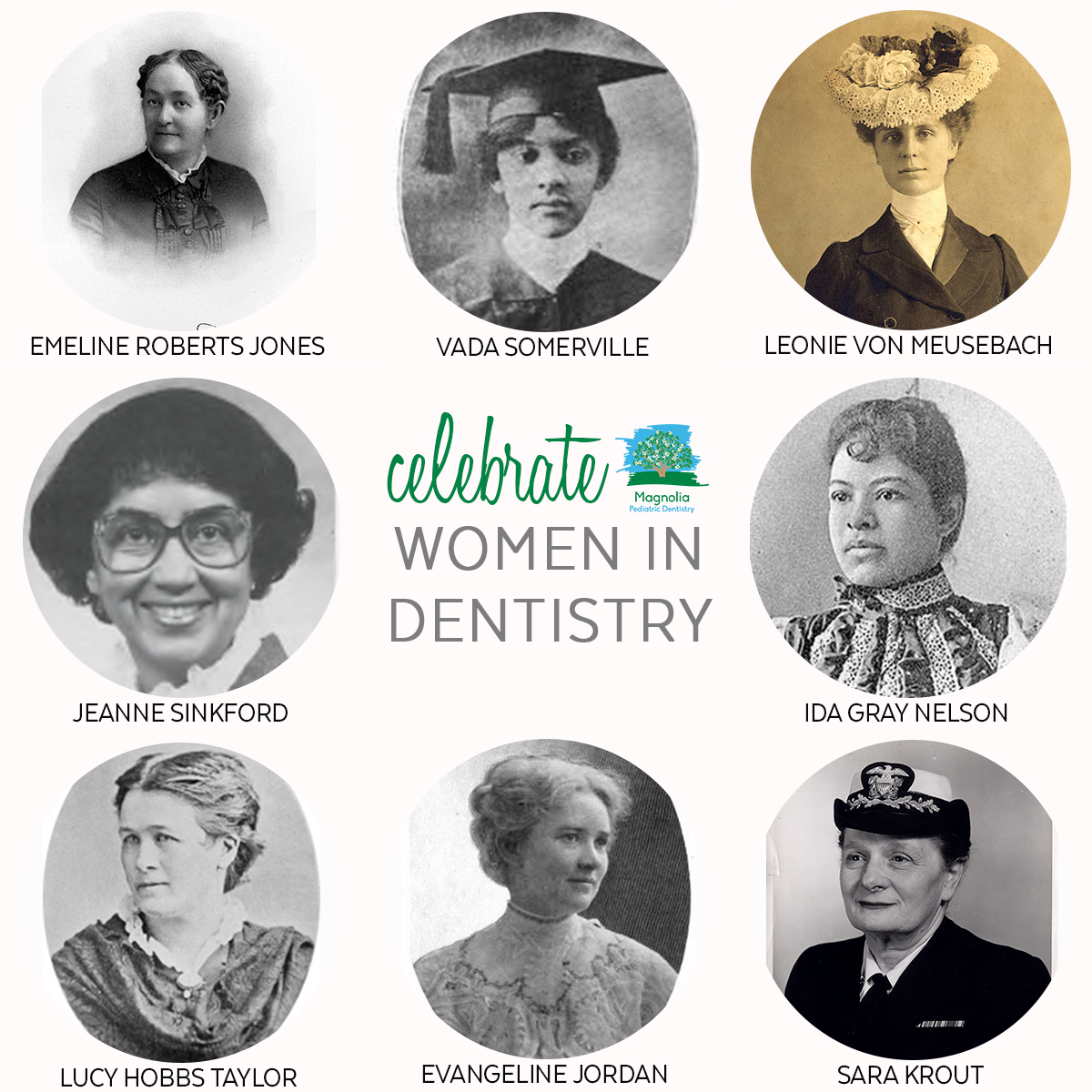 International Women’s Day is March 8th and we thought it would be fun to highlight just some of the incredible women in dentistry who have broken down barriers and fought for equality!

Emeline Roberts Jones was the first woman to practice dentistry in the United States. She was married to a dentist who didn’t think it was acceptable for women to practice dentistry. Emeline studied and extracted teeth secretly. When she shared her secret with her husband, he agreed to let her practice with him. She even took over the practice completely when he died.

Vada Somerville was a civil rights activist and the second African American woman to receive a Doctor of Dental Surgery degree in California. After attending the University of Southern California, Vada married a dentist she’d met in school. After the United States entered World War I, Vada decided to become a DDS because she was worried that if her husband was drafted, he would lose his patients. When she entered dental school, she was the only woman and only African American in her class. Upon graduating, she was the first African American woman to be licensed to practice dentistry in California!

Lucy Hobbs Taylor is the first woman to graduate from dental school in the world! After being denied admittance to two dental schools in Ohio, she created her own education in dentistry by being tutored by dental school graduates. She decided to move to Iowa where it would be legal for her to open her own practice without a degree from a dental school. When the Ohio College of Dentistry decided to waive their policy prohibiting women from attending the school, Lucy enrolled as a senior because of all of the years of studying with tutors she’d accumulated. Upon graduating, she was the first woman to receive a doctorate of dentistry in the world.

Evangeline Jordan was an American dentist and the FIRST to specialize in Pediatric Dentistry. While attending school at the University of California, she ran a dental health clinic at an orphanage in San Francisco. After graduating, she opened a general dentistry practice in Los Angeles and eventually limited her practice to children. In 1916 she gave an important presentation linking dental health to child development and recommended less sweets, more milk, eggs, and vegetables in children’s diets. In 1925 she wrote the first pediatric dentistry textbook!

American women dentists were eager to serve in the military, but military policy only accepted women as nurses. Despite repeated requests during both World Wars, women dentists were denied the opportunity to use their expertise and experience to serve their country. Sara Krout was one of those women! An immigrant from Latvia, in 1944 she became the first woman dentist in the US Navy. She had dental degrees from both her native country of Latvia, and the University of Illinois.  Dr. Krout was prevented from enlisting directly as a female dentist due to military restrictions. In order to serve, she joined the U.S. Navy’s Women Accepted for Volunteer Emergency Services (WAVES). She was on active duty at the Great Lakes Naval Training Station from 1944 to 1946 and stayed in the Naval Reserve until she retired in 1961.

Ida Gray Nelson was the first African-American woman to become a dentist in the United States. She became interested in dentistry through working for Jonathan Taft, an early advocate of women in dentistry.  After working her way through high school as a seamstress, she enrolled in the University of Michigan School of Dentistry. She then opened a practice that served both black and white patients from 1890-1928. She was known for her gentleness with children and remains an inspirational figure!

Leonie von Meusebach–Zesch was born in Texas and was a pioneer dentist dedicated to serving those who didn’t normally have access to dental care. During the Great Depression, Meusebach–Zesch provided dental care to enrollees and officers with the Civilian Conservation Corps and later to inmates at the California Institute for Women. For four years she practiced in her home state of Texas. Three years of her dental career were spent in Arizona where her patients included people from the Hopi and Navajo populations. To accommodate patients who could not travel to her practice, she hooked her equipment to the back of her car and held mobile dental clinics around the state. For fifteen years, Meusebach–Zesch practiced in the Territory of Alaska. To serve remote villages, she traveled by airplane to islands and even survived a plane crash. Throughout Alaska’s interior, she traveled by dog sled to hold mobile dental clinics for patients.